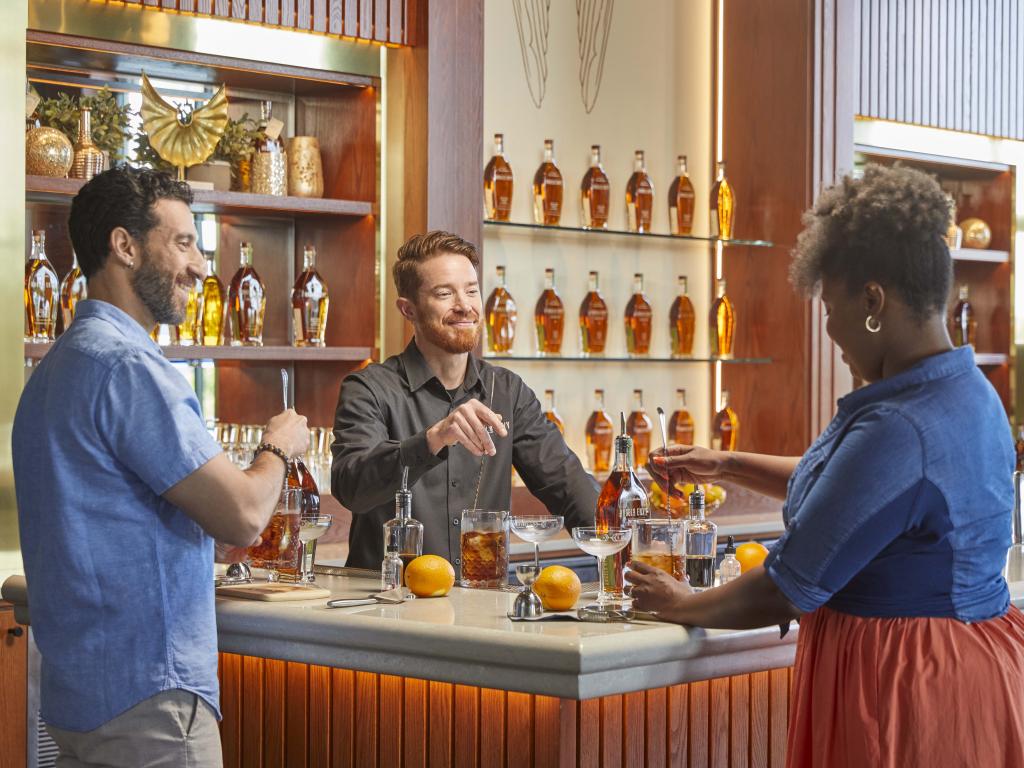 Here is a roundup of some big changes and additions to some of your favorite distilleries in Bourbon Country. Even if you’ve been on the Kentucky Bourbon Trail dozens of times, there’s even more to see and do now.

[CLERMONT, KY] The distilling artist formerly referenced as Jim Beam doesn’t do anything small, and why would they? They’re the #1 producer of American Whiskey (by volume) in the world and it’s not even close. Of the 10,300,000 (and change) barrels of liquid resting and nesting in Kentucky, Beam claims over 4,000,000 of that stock. One company with 40%+ of the Bourbon State’s prized libation commodity. They biiiiiig.

It’s only fitting and right that for their official rollout of the new Homestead Experience, you guessed it, they did it BIG. James B. Beam Distilling Co. stayed closed through the entire pandemic (2020 – 2021). In the Bourbon business, the saying “good things come to those who wait” is held near and dear in our hearts. The upgraded James B. Beam Distilling Co. Visitor Experience is now open, showcasing an elevated consumer experience that celebrates Beam’s 225-year bourbon legacy. And boy oh boy, did they ever deliver and make good on that saying. New features in the $45 million project include the Fred B. Noe Craft Distillery, which specializes in small-batch and next-generation whiskies and also operates as a facility for experimentation in fermentation and distillation. Also, the American Stillhouse has been rebranded as the American Outpost, which offers a one-of-a-kind visitor and retail center, complete with new tasting rooms and more merchandise. And speaking of visitors, while you wait for tours or shop for bottles, and/or just bask in the breathtaking Beam Country scenery, you can grab a bite to eat and a cocktail at the new Kitchen Table. Inspired by the Noe family kitchen table, KT features fare from local farmers and producers. The 5,000-square-foot restaurant and bar has a stunning view of the beautiful Clermont countryside. Impressive variety of culinary offerings ranging from wood-fired pizzas, fried catfish, country ham, burgers…elegant comfort food – ideal for soaking up booze! And matching culinary might, the cocktails are on point. Really impressive setup and a big add to the distillery-based Culinary & Cocktail scene within Bourbon Country. They really knocked this entire concept out of the park!

Last, certainly not least… the distillery tour has a fresh makeover and is officially called “Beam Made Bourbon” - an immersive visual educational experience showcasing how to make bourbon the “Beam Way.” Essentially your very own ‘Cliff’s Notes’ version of how Beam Whiskey is made. Met with an enchanting waterfall upon walking inside which showcases Kentucky’s limestone enhanced aqua. From grain to barrel char all the way to glass – it has your “how they do that” box checked.

While Beam also shut down its Urban Stillhouse located in downtown Louisville during the pandemic, the company has noted a new Louisville presence is on the horizon.

[BARDSTOWN, KY] If you’ve stopped by Heaven Hill during this last year, you probably noticed three things: a new state-of-the-art rick house with a panel of windows showcasing the aging barrels; hordes of bourbon hunters lining up each morning to get the day’s premium offerings; and noise — lots of noise — as construction was underway for the new $19 million expansion of the Visitor Center.

The new amenities and facilities of the Bourbon Experience were unveiled last summer and feature Five Brothers, a new second-floor bar and restaurant for cocktails and flights; an enhanced retail space; several interactive, educational areas dedicated to specific Heaven Hill brands, including the 1935 Distillery Theater; and a “You Do Bourbon” immersive space where guests can bottle their own bourbon.

The makeover and expansion tells the story of Heaven Hill from its beginning in 1935 to the many brands in its lineup that honor bourbon legends like Elijah Craig, Evan Williams and John E. Fitzgerald.

Interactive, educational experiences are immersed throughout the Visitor Center, focusing on the brand’s 130+ year history. There is a wing dedicated to legendary Four Roses employee Al Young which is a must-see, including a jaw-dropping vintage collection of Four Roses bottles over the many decades.

[FRANKFORT, KY] During Covid, Buffalo Trace Distillery expanded its Visitor Center, and it really couldn’t have come at a better time. The space has more than TRIPLED in size, allowing visitors to spread out among the retail shop, private tasting rooms and tour check-in areas. Now, there is order for the masses of people who line up to grab a special bottle from the Visitor Center each day.

It is all part of Buffalo Trace’s ongoing $1.2 billion infrastructure investment, which began in 2016 and includes a $50 million bottling hall, a new barrel warehouse every three months and great improvements and expansions in production facilities.

[LORETTO, KY] Maker’s Mark is home to a beautiful, scenic lake that acts as its main water source, hence the reason this location was first chosen for a distillery long before Maker’s took over in 1953. Finally, after almost 70 years, they’ve built a facility that shows off this attractive asset with the Lakeside Tasting Room, a quaint, intimate, cabin-like structure that offers an additional 2,200 square feet for visitors doing the Private Selection barrel picks and other special events.

With a spectacular view of the lake and a state-of-the-art bar, we wouldn’t mind living here if they ever decide to add a bedroom. Heck, the couch is comfy enough, so just let us know when we can move in!

It seems that ever since Bardstown Bourbon Company opened its doors in 2017, there have been plans for expansion at the 100-acre site that features not only a massive distillery but rick houses, a full bar and restaurant, private tasting rooms, offices, etc. The newest addition was a 55,000-square-foot, state-of-the-art bottling facility that opened in 2020, and more is on the way, of course.

The BBCo folks are also expanding the patio space outside the bar and restaurant to make room for even more guests, and they’ll eventually put an outdoor bar there as well. With a new fill-your-own-bottle program at the gift shop and an intimate tasting room built inside a rick house, BBCo is quickly becoming a must-see destination in Kentucky.

Speaking of must-see, “Rickhouse Barrel Thieving” anyone? This brand-new experience allows you to not only thieve your own juice from 3 select barrels, but you get to do it in the world’s largest glass-facing Rickhouse!

•• New spaces will include: five new tasting rooms, where guests can partake in educational bourbon tastings; an additional bar space, where the Angel’s Envy team will continue to craft cocktails for reservation and event guests; an event space and full catering kitchen, allowing the distillery to be used for pairing dinners and private gatherings such as conferences and corporate events; a designated room for Angel’s Envy’s “Bottle Your Own” experience, which, post-expansion, will offer guests the chance to fill their own bottles of Angel’s Envy’s distillery-exclusive Single Barrel offering; and a larger retail area.

•• The current production capacity of the distillery is two million proof gallons per year.

•• Tours can be reserved online at angelsenvy.com. At this time, tasting rooms can only be accessed in conjunction with a tour.

LOG STILL DISTILLERY
[GETHSEMANE, KY] There’s a new/old distillery and tasting room to swing by on your way to Bardstown, and it honors a true bourbon legend, J.W. Dant. Located in Gethsemane in Nelson County, Log Still Distillery revives the site of the old J.W. Dant Distillery, a task taken on by ancestors of the legendary bourbon maker. The hallowed grounds haven’t produced bourbon since 1961. The 4,000-square-foot tasting room opened in May 2021, and the full $36 million project will include a distillery, outdoor amphitheater, restaurant, and the Homestead B&B (a five-bedroom Victorian home that also opened earlier this year) and a world-class 22,000+ square ft. event/wedding venue.

GREEN RIVER DISTILLING
[OWENSBORO, KY] Green River Distilling was a titan of the Bourbon Industry during the thriving late 1800s. The once powerful name has proudly returned to its original home on the western Kentucky riverbank city of Owensboro, and with it, its original DSP #10, meaning it was the tenth distillery registered in Kentucky. There are now over 20,000 ESPs, so yes, this is extremely historically significant. GRD released it's first fully in-house made Bourbon this year which received terrific reviews from the Bourbon world. While visiting, go for the trifecta and make sure to grab some authentic Western Kentucky Barbecue and see the world renowned “Bluegrass Hall of Fame & Museum”.

BROUGH BROTHERS DISTILLERY
[LOUISVILLE, KY] With a grand opening in July 2021, Brough Brothers Distillery brings a culturally unique angle to the amber world of being the first fully Black-owned distillery in Kentucky. The three brothers (Christian, Victor, and Bryson Yarbrough) have succeeded in an exciting first for the Bourbon State. Their distillery, located at 1460 Dixie Highway, has an 8-foot column still and 50-gallon pot still and plans to fill both 25- and 53-gallon barrels.