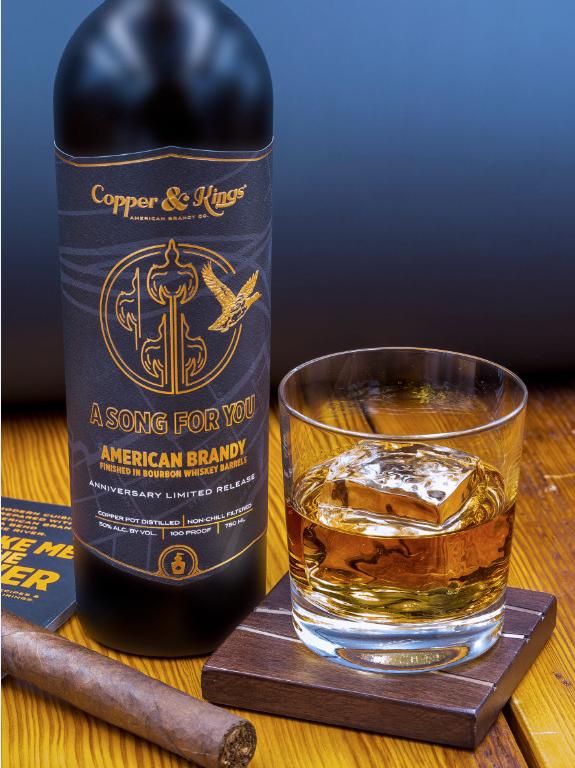 “Five years ago, we launched ourselves off a cliff with the folly that is an American Brandy distillery in Bourbon Country,” says Copper & Kings founder, Joe Heron. “We are enjoying our time on the dance floor, painting with different colors, and we, like a wild goose, have managed to take off. This is a celebration of survival as much as anything, and a thank you to anyone who ever bought a bottle of Copper & Kings American Brandy, and to everyone that’s worked at Copper & Kings with pride, energy and natural enthusiasm. This is our song for you.”

The American Brandy Limited Release is the original sourced “DNA1” blend of pure copper pot-distilled brandy that helped launch Copper & Kings in 2014. Bottled at 50% alcohol by volume, the youngest eau de vie in the blend is now, after five years, 8-years-old, and the oldest is 18, with most being 12 and 13-years-old. The varietal blend is predominantly Muscat de Alexandrie, Chenin Blanc and French Colombard, with additional layering of Thompson and other varietals. At the time, the brandies were sourced from seven states across the USA.

Master Distiller Brandon O’Daniel is appreciative – “We were so fortunate to have some very fine distillers share their aged stocks of pot-distilled brandy with us when we started, and this helped us build a foundation of our own definitive American Brandy as we distilled our own distillate for maturation. After five years in Kentucky bourbon barrels, we have a great illustration of our style – confident, rich and bold, a feisty rambunctious mid-palate reminiscent of fine whiskey, and a lingering smooth brandy finish. A Song For You is rich, velvety, with a silky skirt that wraps inside your glass. It sits in the sweet spot between a fruit forward brandy and a super-smooth, long finishing whiskey. With our own distillate now being bottled, we are up to “DNA9” – but everything was built on the shoulders of this original DNA1, history in a glass.”

Copper & Kings creative director, Ron Jasin says, “The label design is elegant and sophisticated, with a hint of the signature quirk and rebelliousness that is Copper & Kings. We wanted luxury foiling and embossing to reward the drinker, and to reflect the sumptuousness of the liquid. This feels really, really special. To us it does, anyway.”

Available across Copper & Kings at the distillery and at select fine retailers in the USA.